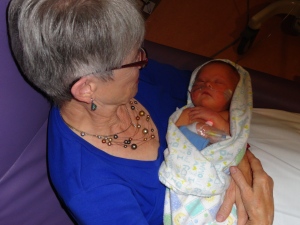 Timothy looks great, and although he has spent most of the weekend sleeping, when he is awake, he is alert and strong, and seems to be recovering well from his colon surgery on Friday.  He is a calm baby and has not cried much, except when we told him that summer will be over by the time he comes home.

(If you’re eating as you read this, you may want to skip past the next few sentences)His surgery on Friday was successful but he needs to show that his digestive system is working by passing something into his colostomy bag.

We have seen two signs of progress:

* After a small feeding his stomach appeared to be empty

This is some progress, but it doesn’t mean much until his bag has something ‘solid’ in it.  It’s like waiting for Santa, as we peek at his bag every 15 minutes.

(Note: As prepared as I thought I was for the colostomy bag, my stomach turns when I look at it, because of the blood and that it’s attached to our tiny son).

Once he has passed something into the bag (which we expect will be tomorrow), the nurses will feel better that his plumbing is working well and then Laura can begin to breastfeed and we are one step closer to bringing the wee king home.

Having him home will be nice.  For one thing, I am tiring of well meaning nurses asking me, “Hey, where’d the baby get his red hair from?”

We appreciate the many compliments and the written applause for us as a family.  But we also know that we haven’t done anything yet, as we are simply hospital tourists with a good sense of humor.  It’s easy to be philosophical when you go home from the hospital at 8pm and get a good night’s sleep.  We realize that the fun will begin when TRBL changes his facebook status from ‘NICU’ to ‘Home’ and we are flying without instruments or nurses.  We know that we can handle it, but sleep will become a little more precious.

People remark at how well we have handled the Down syndrome diagnosis, but we’ve had five months to mourn and learn and accept the idea, and we know that we’ll go through that cycle again and again and again.  We know that the sooner we can get used to the idea, the quicker that we can help Timothy. We have also been inspired by having talked with many awesome parents who have kids with Down syndrome and who do not sugar coat the difficulties or obstacles, but who are able to see the blessings and the humor and wouldn’t have it any other way. That’s pretty powerful.

The staff at Children’s continue to impress, and we are thankful that the big man is in such good hands.  If we want perspective and a sense of how lucky we are, we can just look at the tiny premature babies and the kids with very serious health issues here at Children’s.  We are so blessed and our path is very workable.

We remain thankful for your many prayers and well wishes.  We feel the support.  And a special thanks to my dear friend, Joe Cavanaugh, who has given me so much flexibility at work while we deal with this evolving situation.

Back to Timothy.  Assuming that he is able to pass something into the bag tomorrow, he will be moved from the Neonatal Intensive Care Unit (NICU) to the Infant Care Center (ICC), and then would be a few days or maybe a week away from coming home.

And as much as I enjoy writing these blog entries, I will stop as soon as the lion has left the zoo.  Laura is a little nervous that I will find excuses to keep him in the hospital just to keep writing these, and don’t think the idea didn’t cross my mind, but I think having Timothy home will have to be my consolation.

We’re all very ready to have him home.

(And yes, we’ll get a few photos of Timothy put up shortly.  He’s pretty self conscious about his hat hair and I haven’t been able to photoshop out his infant acne.)

This entry was posted in Uncategorized. Bookmark the permalink.