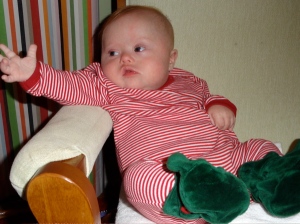 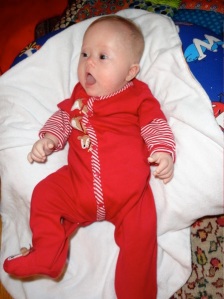 Timothy’s fingernails grow like trees in the rainforest and so we need to clip his nails about every 10 minutes so that it doesn’t look like Mr Scissorhands cut himself shaving.

El Nino is still sleeping well, but has recently been fussier before bedtime and taking longer to get to sleep.  So we’ve started trying a baseball-like rotational system to put him to sleep, with Laura feeding him as the middle reliever, then signaling to me as the closer to put him to bed.  But like Joe Nathan, sometimes I blow a save opportunity, like tonight when I put T down, tried to move him and he immediately made me pay for it with some serious crying that quickly found us back in the rocking chair.  But overall, this arrangement is working well.  He just takes a little while to get to sleep, and thankfully he’s still sleeping through the night.

I’ve mentioned before that Timothy is grabbing at things.  If you’re not careful, he’ll surprise you with a right hook, and all you guys should know (as I do from personal experience) that if you have any chest hair exposed, Timothy will grab it like cotton candy and make you pay for that fashion don’t.

There was a false alarm fire alarm this week at Catherine’s middle school, forcing everyone to evacuate into the cold rain at the end of the school day.  The rumor was that one of the ‘special needs kids’ had pulled the fire alarm.

The funny thing was that if she had told me that a year ago, I would have just felt bad for the kids being blamed.  But when she told me this week, I really got angry.

I could imagine a bunch of kids telling their friends that one of ‘those kids’ must’ve done it.  It felt personal, like the ‘normal kids’ were picking on MY kid.

(And I could see Catherine getting the ‘Oh no, I shouldn’t have said anything — this is going in the blog, isn’t it’ look on her face.)

It reminded me that Major Tim is shifting how we see things.  I’ve always defended people in need, but you have more passion when it’s personal.  Like it or not, this new journey will change our lens.

The girls already live in fear that Mom or Dad will embarrass them in public, and, with vocal parents and a greater sense of social justice, the likelihood of public embarrassment just went up.

Timothy has started repeating a few sounds, and when I say ‘few’, I mean ‘one’, and when I say ‘sounds’, I mean ‘noises’.  But it’s still amazing to see him try to make sense of it.  Even if he is just trying to get me to stop making that noise, he looks like he’s thinking about how to take that sound and convince his mouth to make it.

Timothy now regularly inserts his thumb or hand in his mouth to soothe himself.  But the thumb can be a mixed blessing.  He was rolling over like a champ a few days ago, and then he found his thumb.  It was like he developed a crush on a girl.

He suddenly lost the eye of the tiger – going from trying to break the land speed record for rolling over to being perfectly happy to lay there and do nothing when his thumb is in his mouth.  Friends told me that boys sometimes need a kick in the pants, but I was hoping we’d at least make it to the fourth month.

At least the Christmas tree is finally decorated, after a short delay when the tree was leaning.  We didn’t want Timothy to see a Douglas fir falling in his direction, so I tied the tree to the window.  It doesn’t look very festive, but at least now the little chap can lay on his blanket in peace, and it looks better than the duct tape solution I was considering.

This entry was posted in Uncategorized. Bookmark the permalink.