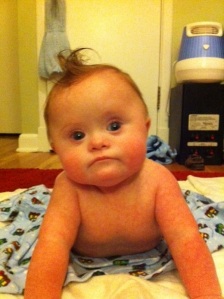 For the past month, Timothy has enjoyed playing the ‘stand up’ game.   It works like this — T is sitting on your lap facing you and holding your hands and you say ‘Timothy, can you stand up?’ and the little guy pops right up (for the record, sitting back down is not his strong suit).  It’s really cute to see him stand up and he gets a big smile on his face.  I found that you need to be careful, as one time he was standing up, and his hand slipped out and he fell back suddenly.  Though I quickly caught him, he was none too pleased by the scare, and flipped on his ‘Diva face’ — mouth suddenly curled sharply downward, displeasure clearly registered, and face frozen for a second to give you an ominous preview of the massive cry that’s about to come your way.

(And don’t worry, new precautions, from safety harnesses and pillows to a pully system have now been installed to ensure no future incidents as a result of the ‘stand up’ game.)

Timothy has always liked to reach out, but it was always more big gestures (gross motor skills) and generally reaching out, like in the direction of someone’s hair, and not so consciously reaching out and then picking something up with his fingers (fine motor skills).  Actually, he’s always been good at pulling hair, but a few months ago, if you put a block in front of him, he would stare at it, maybe wave his arms, but he might not really grab at it.  We assumed that he wanted to grab it, but couldn’t figure out how to make his arms get it done.  (That’s when you start to play the games in your head — “Did I set the block too far away?  Can he not reach it because of that darn Down syndrome thing?  Aren’t most babies grabbing blocks when they’re two weeks old?”)

But we’ve recently seen him be more targeted and deliberate with his gross motor skills, like reaching out specifically for certain things, such as a toy.

Since I figured that few gestures are as universal as a high five, it seemed like a good time to initiate this Father- Son rite of passage (also because I am hoping that at some point in our lifetimes, the Notre Dame football team will give my boy and me something to high five about).

So I recently started holding one hand up and saying ‘Give me five’, and about a third of the time he would answer the call right away, and he’d get excited when he did (or maybe that was me).  After trying this for a bit, I realized that even when he didn’t return the high five, if I was just a little more patient, like giving him 5-10 seconds, he would put his palm in mine most of the time.  He just needed a little extra time to think or maybe wanted to see me sweat.

After he gave me a high five with his left hand, I would shift to his right hand, and then try each hand a few more times, though all bets were off if there was something more interesting to distract him.

Since TRBL was getting the hang of both games, we decided to bring chocolate and peanut butter together.  So now, when he sits on your lap, you can hold out both hands, and the little showman does a ‘two– fer’ – grabbing both of your hands and quickly standing up before you can try to take credit.   A fine party trick, though probably not yet worthy of a booth at the State Fair.

But it’s a blast to see him (and us) progress, from worrying about why he’s not grabbing that wooden block to celebrating with a pair of high fives and a smiling boy standing on your lap.

For him, a few new skills, and for us, just a little more patience and a little less worry.

Now we just need Notre Dame to give us more reasons to celebrate.