Proving that Santa’s not the only one bearing gifts today, Timothy started off Christmas Eve by peeing on me while I was changing his diaper.

Our pediatrician cautioned us that every year she gets kids coming in who have eaten Christmas lights, and so we discussed whether we should get a tree this year.  But we got one, and other than T sometimes trying unsuccessfully to get away with a low hanging star ornament, he and the Douglas fir have so far maintained an uneasy truce.

Of all of the people perplexed by our family set up, I would expect that the folks at the North Pole would be near the top of the list.  Santa’s used to getting all kinds of requests from families, and most of those families fit neatly into one of a few boxes – the young family with a bunch of small kids, the middle aged parents with the kids getting older and asking the tough Christmas questions.  But I can imagine Santa’s elves glancing at our wish lists, and looking up from their workbenches to ask a supervisor, “Seriously?  The SAT prep book and the Curious George anthology are going to the same family and they only have three kids?” 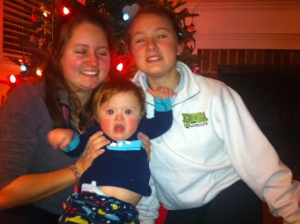 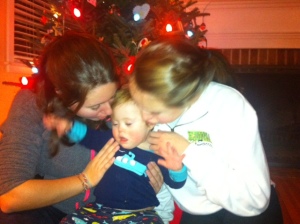 Timothy is taking his crawling to a new level.  He moves quickly from room to room.  I recently set him down in a room, turned away for a second, and when I looked back, Toddler T was gone (note: he was right outside the door, but I still had that moment of panic).  He’s like a scorpion — and we know scorpions from our time in New Mexico.  Timothy crawls quickly across the floor, and sometimes, when he reaches you, he stings.  He has a variety of ‘stings’ – from pulling your hair to squeezing your carotid artery – but the most common is a simple bite.  While some babies take a big bite, TRBL knows that it’s more painful if he can get just a little bit of skin.  And he doesn’t do it very often, which gives him the element of surprise, which is nice.

The little bomber has been having a rough time with his teeth recently.  Laura’s the brave explorer, and said that his molars are coming in, and that three have appeared and the fourth is still backstage (I’m taking her word for it).  As much whining as we ‘young’ parents do to blame crabby behavior on our kids’ teething, it’s gotta hurt to have a few dull, flat molars emerging through your gums, like daisies pushing up through concrete.  And if you’re a baby and can’t explain or ask for help, how do you make sense out of this suddenly throbbing pain in your mouth?  Fortunately, our family always packs Children’s Tylenol, which is God’s gift to teething newborns (and their parents). 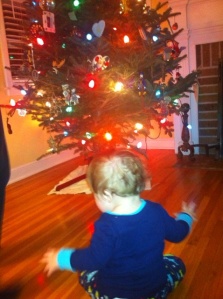 Timothy has no sense of time.  He refuses to wear a watch and rarely looks at the time on his iPhone.  If you’re in a hurry to go somewhere, T is the last guy you want on your team, as he knows how to time a dirty diaper or tantrum with your growing anxiety.

He just doesn’t understand or care how busy the rest of us are.

One of the wise people in my life, Ronnie Brooks, says “There is always time for the things that matter.”

This is a maddening statement, because I never feel like there is enough time.

But I know that Ronnie’s right – there is enough time.

Our daily bubble makes it so easy to lose track of what matters.  Those things – and people — often slip into the background while louder, more urgent, practical and fun things demand our attention.  Many of these other things and people are worthwhile and there are certain things most of us need to do to make a living.

But that statement – there is always time for the things that matter – reminds us that we get to make a choice, and if we’re not happy with the choices we made with our time yesterday, we can make different choices today.

And the important thing in the midst of our ‘To Do’ lists is to occasionally check to make sure that the things that matter to us aren’t always showing up on the ‘Oops, not Today’ list.

It’s something I struggle with every day, but I’m lucky to have a TRBL-maker who enjoys reminding me and the rest of our family of what matters.