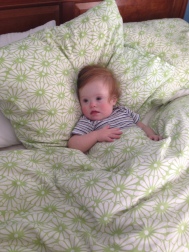 At church tonight, Timothy was acting up and so I took him to the back of the church for a change of scenery.  Back there was a guy probably a few years younger than me carrying a baby girl and clearly in the same current circumstance as me and TRBL.  Relating to a fellow older Dad, I said, “Is this a familiar routine?”  and he responded, “Actually, no.  I’m pretty rusty – I’m her grandfather.”

It’s mid afternoon last Sunday, Timothy is in between meals, and he and I are hanging out in his room, with him crawling on the floor and me sitting in the rocking chair working on my laptop.

With no warning, Timothy looks up at me and starts doing his lizard tongue (in and out), which means he wants to eat right NOW, but he still has some egg on his face (literally, leftover from lunch), so I tell him it’s not time to eat and I give him a book to play with and return to my chair.

He pushes aside the book and crawls out the open door and into the hallway.

I run out, carry him back (his tongue still going) and shut the door and set him down with a book.

Timo starts to rip a page out of the book, so I get up and remove the book and move him toward his crib near some toys.

With tongue still going full speed, he crawls to his bookshelf and starts pulling board books off the shelf, tossing books one after another onto the carpet.

I stand up and set him down by the closed door.  Before I can start typing again, he crawls to the changing table, pulls himself up and is throwing burp cloths and diapers around like Mardi Gras beads.

Now, I don’t know what Dr Spock, the baby doctor, would have suggested, but I decided to save us both time by sitting him down and giving him a snack.

As Laura and Timothy and I were out for burgers last night, we walked past an adult who appeared to have Down syndrome.  She was sitting with another woman.

Here I was, meeting someone who appeared to have the exact same thing as my son and yet I, who am rarely at a loss for words, didn’t know what to say (“Hey — do you have Down syndrome?”).  So I just said “Hello”.

The woman who seemed to have Down syndrome was named Jenny.  She saw Timothy and pointed excitedly to him and exclaimed “He looks like me!”

I was worried about saying the wrong thing, but Jenny summed it up simply.

And then we had a really nice conversation.

We got 6 inches of snow earlier this week and I ascended the stairs at 5:45am to let Elisabeth and Catherine know that it was time for us to shovel the driveway.  I was met with various groggy excuses and pleas for additional time.  Twice I agreed to come back in a bit.

At 6:15am, the phone rang.  The message said that Edina schools were starting 2 hours late.

When I told the girls that they could get a few more hours of sleep, Elisabeth crawled back into bed and said, “I love my life.”

It’s nice when life is not so complicated.