Timothy is nothing if not generous.  He has a cold and his nose has been running like a faucet.  The other day, I grabbed a Kleenex and did my best to wipe away what was under his nose.  Timothy then used his hand to sweep up the rest of the stuff under his nose and handed me what I had missed.  Very thoughtful.

Recently, I’ve expressed some concern that Timothy has not been making many different sounds or making many signs.  And of course, since I wrote that he’s made a ton of progress — babbling much more and making some actual signs.

I knew that one of the benefits of being a ‘mature parent’ would be not worrying about stupid things, like comparing your kid to other kids’ progress or wondering whether he’ll talk ‘on time’.  With the benefit of age, you know that sometimes things just take longer than you expect or want, and sometimes things just turn out differently than you hope.  You learn to be patient and not panic.  But then you have one of these little stinkers in your late 40s and you see how easy it is to slip back into the same worry merry go round.

I think that watching for these key developmental milestones — like when’s he going to talk — is like waiting for your luggage at the airport.  You wait and expect to see your luggage soon, and you see other people getting their luggage, and you wonder why yours hasn’t come yet, and you don’t know whether there’s something to worry about.  You know that, more than likely, everything is fine and your luggage will just arrive a little later.  But it’s hard not to worry until you have your luggage in hand and you’re sure that everything’s all right.  Well, I’m confident that Timothy will be fine in the communication department, but our luggage is just a little later than we expected.

Going through these developmental steps with Timothy gives me a real appreciation for the work of school specialists like Jan and Joan, who spend most of their time assisting kids with special needs with their cognitive (thinking) or motor development.  These two special women started working with Timothy when he was four weeks old and have come weekly ever since, and have been a tremendous help and support for us.

They really help the kids, but much of their work is like that of a dog trainer — teaching parents how to help their kids (different exercises to do with them) and what progress looks like, pointing parents toward resources, as well as answering parents’ anxious questions.  Parents crave clear answers to tricky questions (‘Is there a problem since he’s not yet doing X or Y yet?’), and often Jan and Joan are left to play the role of ‘lost luggage department’ – helping assure us that things take time, progress is not linear and it will probably be okay.  They know in the back of their heads that it’s possible that there is a real problem, but freaking out or jumping to conclusions won’t help anyone.  They walk a careful balance of calming the parents, helping them focus on what they can control, but without making promises or giving parents false hopes.  This is really tricky and we’re so thankful for the work of Jan and Joan. 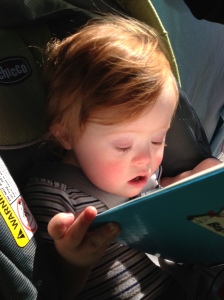 We’re on a driving trip out East for college visits for Elisabeth. Timothy has been a trooper, but any of us would get a little cranky if forced to sit in a hot carseat for eight hours of driving as he has had to do each of the past three days as we’ve driven from Minnesota to Vermont.

We’ve had many fun moments already, but you can’t escape the many adjustments you make when travelling with a 19 month old.  It has led to many moments of forced silence in the car (‘hey, everyone be quiet – we need Timothy to stay asleep’) as well as many moments of forced loudness (‘c’mon, keep Timo awake – it’d be better if he didn’t sleep just yet’) and a handful of prolonged crying sessions — mostly by Timothy, though we’ve each had our drama queen moments.

One of the best parts of travelling is that we often stop by and see people.  We had a very nice visit with our 90 year young friend, Doris (with her daughter and son in law).  Doris’ husband, Ken, served with my uncle Bob in WWII and was very helpful to me in assembling my uncle’s story (The ‘R’ in TRBL in this blog). 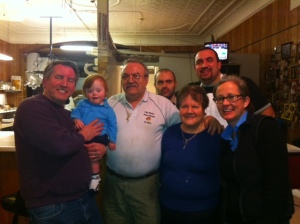 We also met a wonderful Italian family (on the right above), Luciana and her husband and sons, who make fabulous pizza at their restaurant (FairHaven Pizza in FairHaven, VT).  Laura somehow found them on the web during one of those rough driving trip moments — when we were all weak with hunger and a little crabby and not finding a lot of eating options in the cute New York/Vermont villages that we were passing through.  But Luciana and her family served us an awesome meal and had it ready when we arrived!  Good timing.

During this trip, when we pull over for lunch at a fast food place, we extract Timothy from the carseat and then we hope that he’ll just eat like normal.  But we forget that we’ve just removed the chains from the Tasmanian Devil, and so although we hope for a quiet meal… that’s not gonna happen.  Timothy often decides that he’d rather do some people watching instead of eating – his head rotating back and forth like a sprinkler as he tracks and waves to the parade of people who walk past.  During this trip we sat him down at a Roy Rogers (hey, we’re not proud of it either, but the New York Thruway needs to get better options), and put fifteen puffs on his little placemat, he immediately started pounding the table and it took about 3 seconds to transplant those puffs from table to floor.

The real challenge is the hotel.  As I mentioned when we traveled at Thanksgiving, the ‘let him cry it out’ philosophy doesn’t really fly when you’re staying in a hotel, as a crying baby can be heard (or at least you tell yourself) by every other hotel guest.  And believe me, the king of the carseat knows how to use his voice.  Timothy senses that we’re operating with a hand tied behind our back and he likes to exercise his pipes and watch us sweat a little.

In the flurry of activity of these trips there are bound to be a few mistakes.  We’ve visited Colgate and some great schools, and after going a little out of our way to do a quick visit at one college in New York, we talked about our reactions to the campus, and Elisabeth acknowledged that she hadn’t known much about it.  After some conversation, we realized that Elisabeth was only visiting the school because she thought we were interested in it for her, and we were only visiting because we thought that she wanted to go there.  Oops.

If accidentally visiting a college campus is the worst mistake we make on this trip, it’ll be a huge success.

This entry was posted in Communication, Parenting lessons -- Don't try this at home, Too much advice and tagged Cold and flu season, college visits, Jan & Joan, Sign language, Too much time in the car, Travel. Bookmark the permalink.