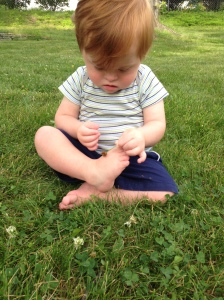 While there is no French in our heritage, we have relatives and friends in France and have been lucky to spend a lot of time over there.

Maybe that’s why sometimes during meals at home (and I say this at the risk of offending Timothy’s namesake, who grew up in Paris), Timothy acts like a classic Frenchman at a restaurant.  Or maybe more like a restaurant critic.

This is because Timothy sits high up in his wooden throne, and despite getting excellent food and loving service from his mom and family, he can sometimes act like his review would read “Food is pretty good, service is well-meaning but spotty and the presentation often leaves something to be desired”.

Between courses, he sits back and shakes his head from side to side and occasionally taps his hands on the tray, as if to say ‘it would be nice to be able to cleanse my palate with a stewed root vegetable between the sausage pieces and the oatmeal courses.’

After he finishes some food, he often looks to his right, around the back of his high chair toward the kitchen, maybe mouthing ‘excuse me, a little less chit chat back there — you only have one customer out here to serve’.

Or maybe ‘With dinner, could I do a white – maybe organic milk – in a yellow and blue sippy cup?’

We’re sure that he’ll be a delight for the school lunch ladies. 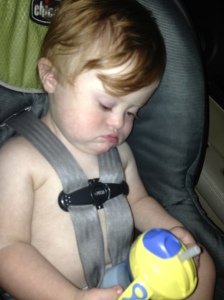 Timothy enjoys climbing up things – stairs, low chairs, family members lying on their backs – but more recently he has been working on the art of ‘getting down’.  It’s so cute to watch him sitting on the couch, and then looking like a penguin at the zoo as he rolls over onto his tummy, swings his legs over the front of the couch and begin his descent downward.  He generally gets a scootch or two down before he realizes that he probably should have double checked the height of this piece of furniture before lowering his feet.  His legs dangle back and forth, his toes searching for the hardwood floor or at least some assurance that he’s not in a deep crevasse.  After a few seconds, Columbus’ toes touch solid ground, he sticks the landing and promptly begins to shower himself with a round of applause to go with his big smile and little squeal.

Fortunately, the boy’s blessed with a little padding on the backside to compliment his diaper because he’s had to do a few emergency landings on his bum. 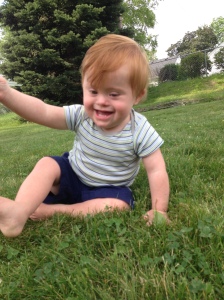 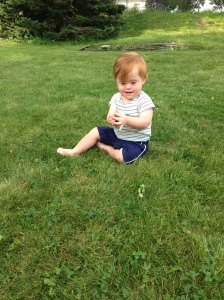 I mentioned last week that Timothy is an angel once he’s asleep.  But as oft happens, I shouldn’t have spoken so soon, as this past week was one of his tougher weeks of sleep.  Whether teething or reacting to the hot weather or bad karma from my overconfident comments, he was crying and waking up in the middle of the night and getting up extra early in the morning.  We’ve only had a few of those tough stretches, and we have many friends who have toddlers who are or were ‘tough sleepers’, and we know just how lucky we are that the king of the crib is an awesome sleeper 99% of the time.

I also mentioned last week that it can be a squirm-fest at bedtime when I carry Timothy from his bedroom door to the rocking chair.  But once he’s raised the white flag on his nighttime resistance, which can take a few minutes or longer, he lays his head on my right shoulder and reminds me what a privilege it is to have a toddler in the house.  Because your day can be hectic, and you can bicker and worry about the dumbest things, but it all melts away once you finish your day with a small redhead snoring gently in your ear.

This entry was posted in Communication, Eating, Sleep and tagged getting down, restaurant critic, sippy cup, there's a baby in our bed (sleep and the single baby), waiter. Bookmark the permalink.

1 Response to The Penguin