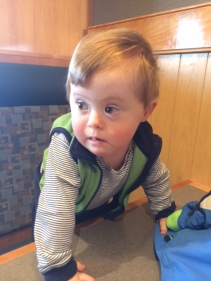 Timothy is making more sounds and his favorite word is ‘carrrrrr’, and he says it whenever he sees a car or hears the word spoken.  His pronunciation resembles someone from Boston clearing their throat as they say ‘car’ (with 5 extra r’s).  And Timo is a very inclusive speaker, using the word to refer to everything from school buses to boats.

On our recent roadtrip, in the midst of a gentle difference of opinion about the mess in the backseat of the car, the adult conversation was occasionally interrupted by a Cindy Lou Who-like whisper ‘carrrr’ as Timothy responded to his cue word. 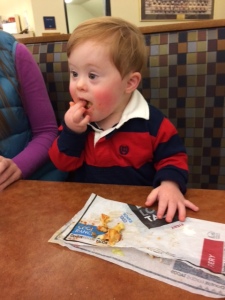 As mentioned a few weeks ago, Timothy loves to play with his hair, especially his bangs.  This is cute, but playing this game while he’s eating is the reason that the little prince could use a bath or hosing down after pretty much every meal.

(In the latest twist this morning, the tub stopper in question has now gone missing.  Coincidence?  We don’t think so either, and we’re trying to get the usual suspect to spill the beans.)

We forgot how cool it is to see a new walker wobble, steady themselves, and then try to move forward.  For Timothy, it’s ten steps at a time, sometimes running, often falling, but always screaming.  When he’s been sitting and then slowly rises to his feet, he looks like Godzilla getting ready to walk over a city.

Between a doctor telling us early on that he thought that Timothy might walk by 14 months, to Timothy’s early ability to pull himself up on furniture, it has felt like Timothy has been on the verge of walking for almost a year.

When both of our (now teenage) girls were little, they crawled for a few months and then just started walking and running when they were a year old.  No assembly required, and I didn’t even have time to take credit for their progress.

And so we’ve been working a lot with Timothy (and have had a ton of help from the folks at the school district and his pre school), learning about how complicated walking actually is, and asking ourselves when he would walk.

A wise friend, Thom Winninger, refers to this time in the waiting room as the ‘limnal space’.  It’s any time that we’re in limbo, whether between jobs or relationships or waiting for something to happen.

The funny thing about limnal space is that most of us really, really don’t like it.  Because this time can be uncertain and messy, and most of us (myself very much included) just want things to be clear, and so we just want to get to that next phase.  We want so badly to get to the next step or have more clarity that that’s all we focus on.

But even if it doesn’t feel like it, Thom says that there is something really unique and beautiful about our time in the limnal space.  Because these are moments when we’re vulnerable and a little unsettled.  And if we’re able to calm down and listen, and even try to appreciate it, these limnal moments offer a lot of opportunities for us, for insight and growth.  We can learn a lot about ourselves – about how much we can do and endure — during these times.

And so, as if we needed another reminder, Timothy’s path to walking is yet another one, reminding us that while it’s good to aim toward our future goals, we need to also work hard to just settle down and enjoy today, and not hold our breath until that next big milestone arrives.

Because we still want to believe that we can control so much of this stuff, but Timothy shows us every day that many things will work at their own speed, whether we like that or not.

And so it’s probably a good idea for us to learn to like it.

That is, as long as we’re not spending all day refilling the little prince’s bathtub.

We would have laughed if someone had told us four years ago that in the Fall of 2013 we’d still have two kids at home, but that one of them would be a little red headed scrapper, and that Elisabeth would spend her senior year studying in India.

We feel very fortunate and blessed, and we’re going through an amazing period of learning, from both India and Edina.  We’re so thankful for these experiences, and are especially grateful for our families and friends.

This entry was posted in Communication, crawling, Down syndrome, Too much advice, walking and tagged bath time, limnal space. Bookmark the permalink.

4 Responses to The Usual Suspect