A Boy and his Rug

Catherine went to the Edina Homecoming Dance on Saturday night and people loved it when Timothy busted out his breakdancing move (yes, ‘move’ is meant to be singular) at the pre-dance photo session.  ________________________

Mealtime with Timothy used to be a battle, but now it’s more of a ballet (which ironically has about the same letters).  In the past, T might register his disapproval by throwing an unwanted piece of French toast.  Now, Timothy is using a more subtle game of resistance.  Instead of throwing, he slowly raises the out of favor piece of French toast in the air, and looks at you quizzically/maniacally (as if to say ‘your move’).  He dangles the innocent piece of food precariously behind his chair, ready to let it drop to the ground at any moment.  His graceful movements would be a thing of beauty, but are harder to appreciate when he’s blackmailing you.

We’ve mentioned before the Turkish rug in our living room that we bought during a vacation.  We talk to our girls about using good judgment, and maybe that’s partly because it was a slight lapse of judgment in Istanbul in 2008 that resulted in a small windfall for a rug dealer and the arrival at our home several weeks later of an 80 year old Turkish rug.  The rug was a staple in our house for several years until Timothy arrived and started using the fringe of this rug of dubious origin as a pacifier.  As much as we liked the rug, seeing our toddler flossing with its fringe led us to decide to put the rug away.  But after some time, the rug returned to its rightful place in the living room.  And we love it.

But about a month ago, Timothy started turning his attention back to the Turkish rug.  That beautiful rug – which had survived 80 years of conflict in the Middle East and a few years of tension in the Lee household – suddenly found itself being rolled up by a three year old boy.  Timothy would be playing in the living room, we’d look away for a minute, and when we looked back, he’d made a unilateral decision to remove the floor covering.

We would chuckle, and roll the rug back out.  But he kept doing the Turkish roll up, and we kept stopping him and suggesting that he redecorate his own room.  He rolled it up several times, and then, one day, Timothy’s carpet rolling up days stopped as suddenly as they’d begun.

But let me tell you — this boy is stubborn, has a long memory (which is easy to do when you’re only three years old), and more often than not, he gets his way.  So I didn’t think for a minute that we’d seen the last skirmish between the Turk and the toddler.

Well, in the past few days, Timothy has had a stomach bug.  In order to help him get past the resulting case of bad diaper rash, we’ve been letting him walk around the living room without a diaper (don’t worry – this is all leading somewhere).

That encouraged nudity has been good for him, but we got a little nervous about potential collateral damage to the floor, furniture, etc.

We talked about what to do, and we decided that it would be wise to at least protect our favorite Turkish rug by putting it away indefinitely.

But after we rolled up the rug and put it down in the basement, I realized that it couldn’t have worked more perfectly for him.  Timothy had finally gotten his way.  A stomach bug is a heck of a way to win, but he got the job done.  The kid’s like a mafia boss.  If he wants the Turkish rug gone, that rug will be gone.  And if you won’t let him do it, then he’ll find someone else to do it for him… like you. 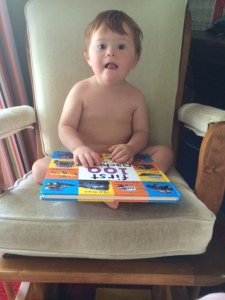 And what else would you expect from our red headed breakdancing ballerina?

4 Responses to A Boy and his Rug